PC storage has advanced in exciting new directions in recent years. PC users now have a wide range of options from standard SATA SSDs and hybrid drives to the latest PCIe 4.0 NVMe storage devices and new technologies like Intel’s Optane.

Unfortunately, many of the tools for measuring storage performance were developed when HDDs were the most common type of drive. And results from synthetic benchmarks can be hard to relate to real-world performance.

PCMark 10 introduces a set of four storage benchmarks that use relevant real-world traces from popular applications and common tasks to fully test the performance of the latest modern drives.

The Full System Drive Benchmark uses a wide-ranging set of real-world traces from popular applications and common tasks to fully test the performance of the fastest modern drives.

The Quick System Drive Benchmark is a shorter test with a smaller set of less demanding real-world traces. You can use this benchmark to test smaller system drives that are unable to run the Full System Drive benchmark.

The Data Drive Benchmark is designed to test drives that are used for storing files rather than applications. You can also use this test with NAS drives, USB sticks, memory cards, and other external storage devices.

The Drive Performance Consistency Test is a long-running and extremely demanding test with a heavy, continuous load for expert users. In-depth reporting shows how the performance of the drive varies under different conditions.

You can find more details in the PCMark 10 Technical Guide. 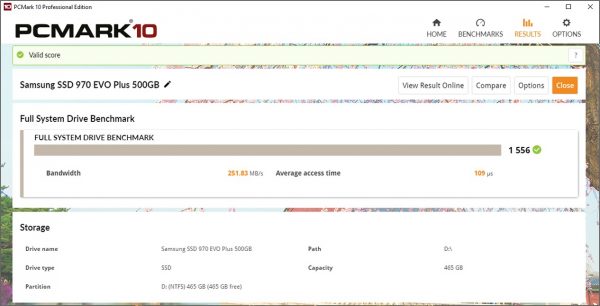 PCMark 10 Storage Benchmarks produce an overall score as a measure of drive performance. Comparing devices is as simple as comparing scores. The tests also measure and report the bandwidth and average access time performance for the drive.

Unlike other synthetic storage tests, this focus on real-world activities enables PCMark 10 to show meaningful differences between the latest, high-performance storage technologies.

You can compare up to four results in the PCMark 10 app, or export your results to Microsoft Excel for more detailed analysis. 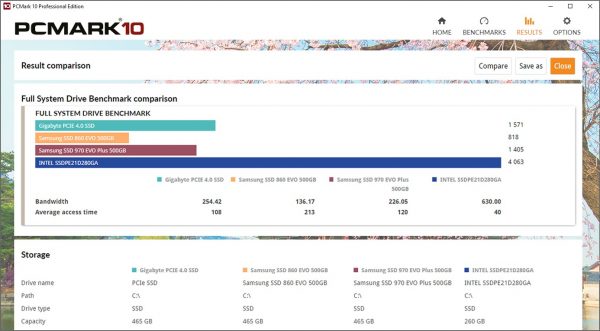 PCMark 10 Storage benchmarks are available now as a free update for Professional Edition customers with a valid annual license.

For new customers, PCMark 10 Professional Edition starts at $1495 per year for a single-seat license. Please visit the UL Benchmarks website to request a quote.